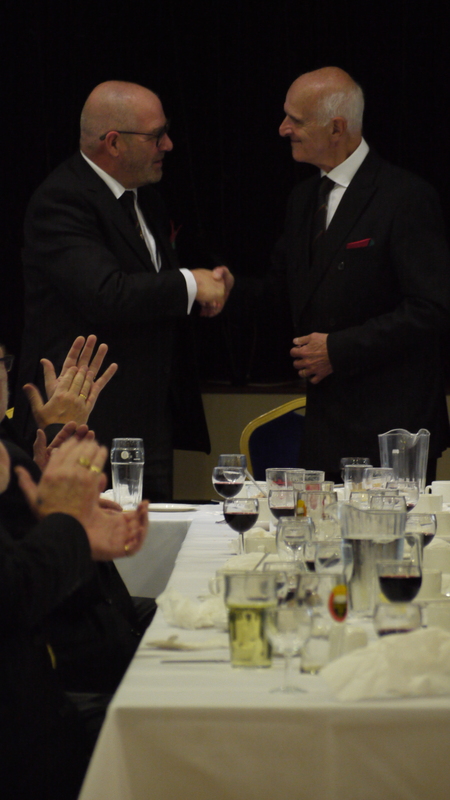 Many more Brethren were sadly unable to attend as they were suffering from or because of Covid 19.

Provincial Grand Chapter having been opened the morning began when the Brethren gathered paid tribute to:

who had departed since the previous meeting of the Province on 15th February 2020.

Bro Michael Warner was then successfully balloted as a member of the Province and was advanced into the Order.

The Right Worshipful Deputy Grand Master and Governor in a most dignified and sincere ceremony according to the traditions of the Order, obligated, invested and installed Bro Leavers as Provincial Grand Master.

The Brethren sang the 100th Psalm, All People That on Earth do dwell.

At the conclusion of the Proceedings, Provincial Grand Lodge was closed. All the Brethren then joined together in a most excellent luncheon together with suitable wines.

More photographs from the event can be found here. 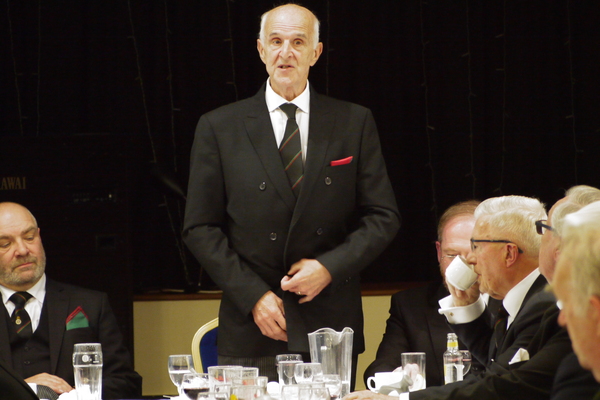 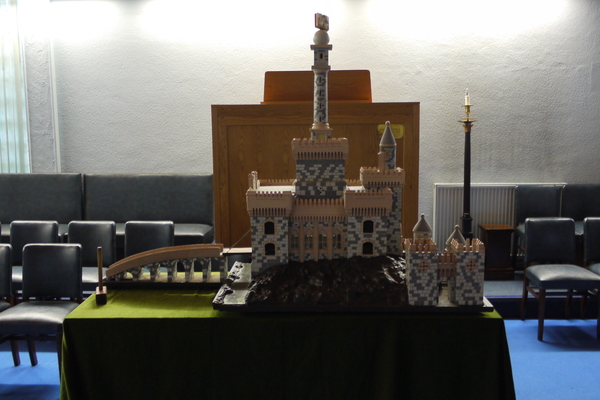 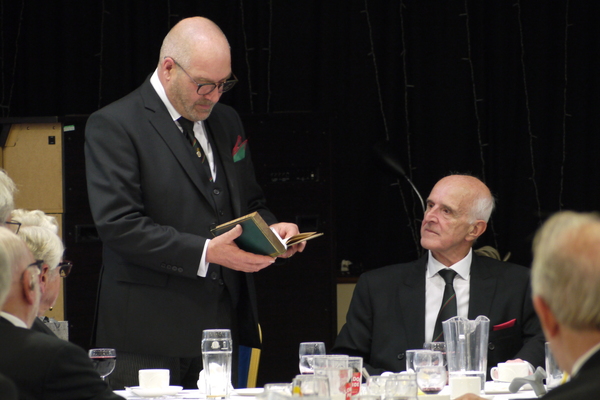 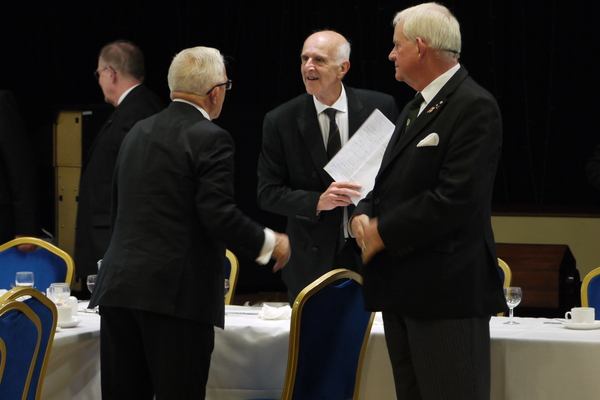 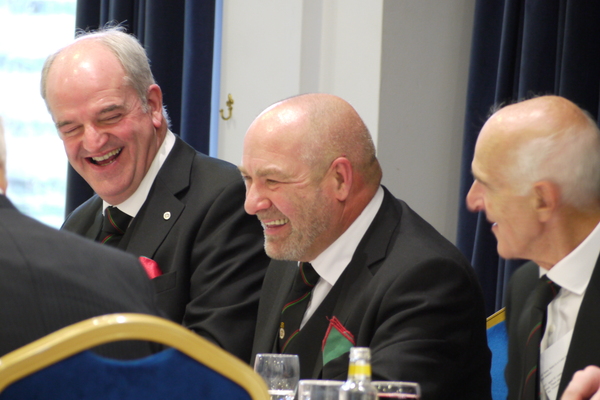 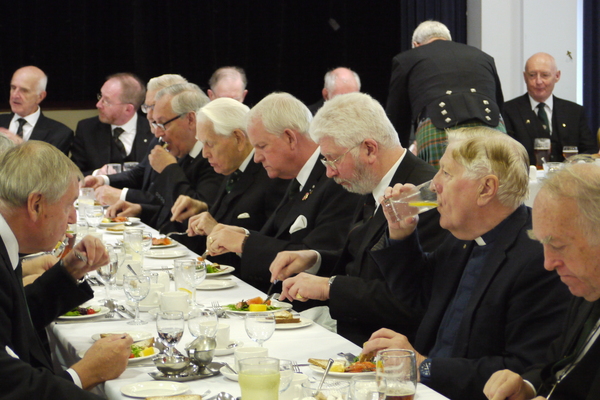 After his installation as Provincial Grand Master for the Southern Counties of England at Sindlesham on Saturday 16th October 2021 Bro Roy W Leavers, on behalf of the Province, presented a Book, to Bro Ewan Rutherford, Right Worshipful Deputy Grand Master and Governor as a token of the very high esteem and respect in which he is held in the Province.

The book, ‘Robert the Bruce and the struggle for Scottish Independence’, was written by Sir Herbert Eustace Maxwell. Sir Herbert was a member of the Maxwell Clan; who under the then Clan Chief, Eustace Maxwell, fought alongside Robert the Bruce at the Battle of Bannockburn. Sir Herbert was born on 8th January 1845. His correct title is Sir Herbert Maxwell, 7th Baronet of Monreith, KT, PC, JP, DL, FRS, FRG. He was educated at Eton and at Christ Church, Oxford; from where he graduated as a Doctor of Laws (LLD.) He is a former Captain in the 4th Battalion Royal Scots Fusiliers. From 1880 to 1906 he was a member of the House of Commons. During the period 1886 to 1892 (the administration of Lord Salisbury) he was a Lord Commissioner of the Treasury. The First Lord of the Treasury being the Prime Minister, the Second Lord of the Treasury being the Chancellor of the Exchequer and the four, or more Junior Lords of the Treasury are Government Whips. He was President of the Society of Antiquaries of Scotland; Chairman of the National Library of Scotland; Chairman of Royal Commission on the Ancient and Historical Monuments of Scotland (RCAHMS). In 1917 he was also awarded the Victoria Medal of Honour by the Royal Horticultural Society. Sir Herbert wrote many books on various subjects, including plants.

The Book presented to Bro Rutherford was first published in 1897. It is a comprehensive work on the reign of King Robert I. It includes an account of the early history of Scotland and the succession disputes of the late 1200s that in part led to Bannockburn. There is every reason to believe that this is a first edition which was specially bound for Sir Herbert. The book is also special in that it was presented as a school prize for merit. On the inside page it is inscribed, in manuscript, ‘Magdalen College School, Brackley, 3rd Mathematical Prize awarded to F N Bartlett July 28th 1898’. In addition, the book is bound in green leather and embossed with the Coat of Arms of Magdalen College School. It is also the coat of arms of Magdalen College, Oxford, itself the personal coat of arms of William Waynflete. He was Provost of Eton (1442–1447), Bishop of Winchester (1447–1486), Lord Chancellor of England (1456–1460), founder of Magdalen College. Beneath the Coat of Arms, there is a Latin inscription ‘Laborum Praemia’.

Sir Herbert died on 20th October 1937, aged 92 years. He was a man of great intellect and was highly respected. There are many pictures of him, the negatives of which are with the Victoria & Albert Museum in Kensington. More information can be found here.

Meeting of the Province, October 2021

Due to Covid-19, there have been no meetings of the Province since Saturday 18th February 2020. With the lifting of restrictions the next meeting of the Province will be held on Saturday 16th October 2021 at Sindlesham Masonic Centre at 10.30am.

The Order of Proceedings, which also contains dining arrangements, is attached. A copy of which will be available for all those that attend on the day.

The Province of the Southern Counties of England is blessed with many Brethren who, despite holding commitments in other Orders of Freemasonry, work quietly in the background. They do not seek prominence just the long term success and prosperity of the Province and the Order. These Brethren contribute in so many different ways which guarantee that we do not lose sight of the aims and wishes of our original Founders, and successors, so ensuring continuity. It enables us to embrace new technologies, maintains our traditions and standards whilst our happiness and enjoyment of the Royal Order of Scotland are undiminished.

This has been the case for many years with Brethren happily accepting anonymity safe in the knowledge that it is for the benefit of the Province and for the Brethren. It is right that those whose considerable commitment in other Orders of Freemasonry, coupled with the same quiet commitment and dedication that they give in the Southern Counties, are acknowledged. Currently, we have Brethren who gladly contribute yet their efforts are not appreciated or acknowledged as they are not fully known. That there are many is without dispute and it is intended that this will be the first of several articles highlighting those Brethren who achieve much and whose only reward has been personal satisfaction. It is a small and belated tribute, to those caring Brethren of our Province who put other people's needs and interests over their own. The acknowledgement of the Province is a sincere thank you for all that they have done and will doubtless continue to do.

Provincial Grand Masters on retirement continue to serve and have their own special section on this website and are not, therefore, included. I am sure they will be in total agreement with this sentiment.

Corinthians 1.13.4 states that ‘Charity suffereth long, and is kind; charity envieth not; charity vaunteth, not itself, is not puffed up’ and these words ring so very true of Bro Lt Col Bruce S Dyson, Past Substitute Provincial Grand Master. He is the epitome of an almoner. As a Province, we were blessed to have Bruce serve us in this capacity, even though he had commitments elsewhere. Being of a most convivial nature Brethren had no hesitation in speaking to Bruce in confidence about a Brother's need. Quietly and unassumingly he would do all that was expected of an almoner, and more. He fully embraced Corinthians 1.13.4 by persistently ensuring the welfare of our Brother. A phone call, whilst in itself is uplifting, was not enough for Bruce.  He attended to not only the Brothers immediate need but also gave further attention until the matter was resolved.  Once the Brother ‘Was in Bruce’s system’ he remained there. That he put in very many extra hours is not in dispute, neither are the untold benefits that resulted from Bruce’s undoubted compassion. These efforts were greatly appreciated.  Bro Bruce has that wonderful ability to combine, compassion, care, duty and sympathy in the most sincere way. He has set the highest of standards as an almoner and is greatly respected.

The Province is indebted to Bro Bruce. Thank you.

You can read his eulogy here: BC_Wareham_Eulogy-1-1.pdf